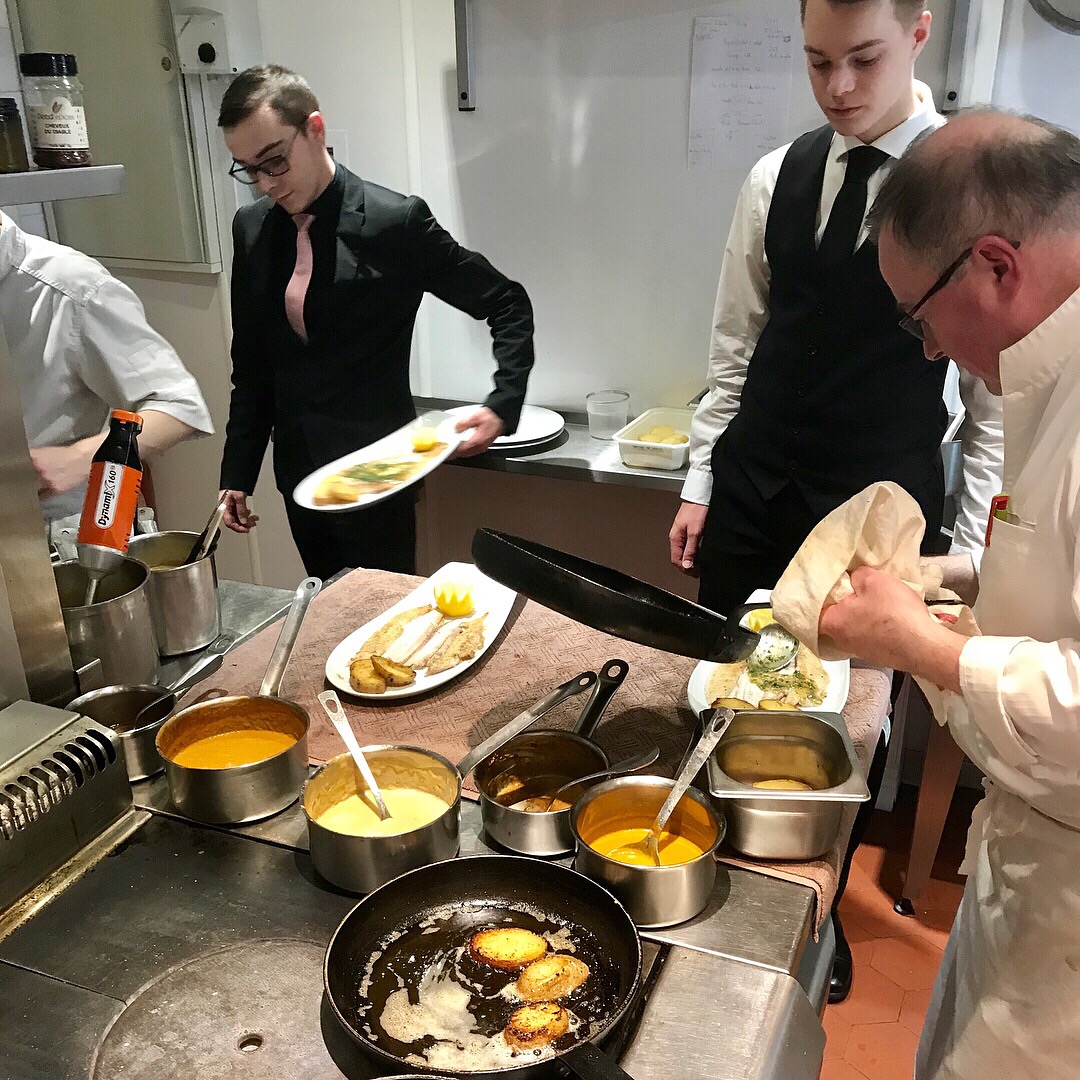 What started as a weekend in Paris, a pit stop between our extended stays in Italy and Spain, ended up being the most impactful weekend of this entire journey. Paris was beautiful, don’t get me wrong, but there was something missing for me in this sparkling city. I didn’t feel a connection with this country, except for the Ladurée macarons I ate in NYC that one time. It took me a metro, two trains, and a car to find this missing piece. I found the magic of France in the small town of Gasny. 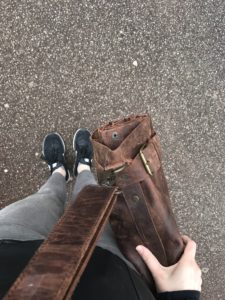 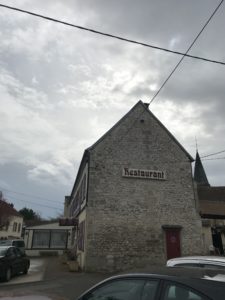 Gasny is just outside of Vernon, most known as the city with Monet’s house and garden, which is just about an hour out of Paris. Gasny has approximately 3,000 residents, one roundabout, and one impressive restaurant that may be the only reason this town sees visitors (besides Monet of course). I had a stage lined up at this one impressive restaurant- Auberge du Prieuré Normand, and I stayed with the owners, Mr. and Mrs. Phillipe (and their cat Génépi) in their home on the second floor, just above their workplace. For 48 hours, I quite literally slept, ate, and breathed this place. I fell asleep dreaming of French cookbooks and woke up to the very familiar scent of a well prepared veal stock (or fond, as the French call it). It was fulfilling in every sense (and scent), and it also pushed me farther from my comfort zone than I think I’ve ever been.

The madness began on a Saturday morning, coincidentally during a train strike affecting all of France, on a very rainy and blustery day. Chris, being the wonderful husband he is, rode half way to Gasny with me, on the long train that we didn’t know we took until our arrival time came and went. Once we arrived (late) at stop one, we ran in the rain trying to find his train back to the city. As I shoved him through the closing doors of the train I was *pretty* sure was his, I had one quick “oh shit, I’m on my own” moment before I turned around and sprinted to find my next connection. I made it to my train by skin of my teeth because hallelujah, it was delayed. Next step: find my host at the Vernon train station. After a few translated texts, Natalie (Mrs. Phillipe) and I found each other. She asked “parles français?” (one phrase I do understand), and I sadly shook my head no. She continued speaking to me in French the entire drive to the restaurant, hoping that it would somehow just click. It didn’t.

Chef Robert Phillipe greeted me from the kitchen door in a typical white coat and immediately, I felt a little at ease- it was just another kitchen. The smells were familiar, the bustle of the kitchen staff made me want to jump in and get to work, even the sound of the dish pit was comforting. Chef Robert told me I am here to learn and experience, and to understand classic French cuisine on a deeper level. He welcomed me into his home upstairs, showed me to his daughter’s old room, and asked if he could cook me lunch. We sat at a card table in the middle of the kitchen and Chef proceeded to whip up probably one of the most delicious meals I have ever had. His wife Natalie joined me at the table with a full baguette and a pound of French butter she stole from Chef’s station. I started with a foie terrine, which I later learned how to make from Sonya, their line cook from Bulgaria. Chef prepared us entrecote of beef from a farmer down the road, with a foie sauce and “batonnet” vegetables cooked “glacer a blanc”- two culinary school techniques I’ll never forget. I found comfort in the familiarity of small details like this throughout the weekend. Back to that foie sauce: This was nothing like I had ever tasted, yet is quite typical in French cuisine. Chef Robert showed me the latest article in the newspaper recognizing him for his sauce Albufera, made of French liquors, heavy cream, and foie gras. Natalie and I ate mostly in silence, with her occasional question “c’est bon?” (Is it good?) to which I’d try to murmur some sort of French word for good, but I’d usually end up shaking my head in agreement. We ate just before lunch service began and the intensity of the pre shift hustle was my cue to finish my last bite and fold up this table because it was about to be show time. 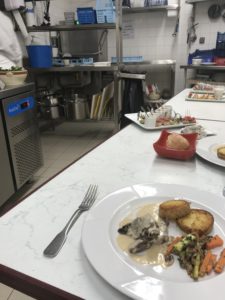 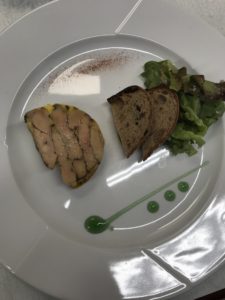 Service lasts only 2.5 hours, with an average of 60-80 guests per shift, reservation only. There are four prefix menus to choose from, including my favorite: “Menu foie gras et Homard Bleu,” a six course meal of foie and lobster. The tickets are hand written and Chef is the expo, and also happened to be working the grill this day. He told me he doesn’t usually work the line, so I was even more impressed by his calm and close to perfect execution during service. He put us young guns to shame with his chef dance.  I shuffled back and forth between the pantry/pastry station and behind Chef on the grill. He and his sous chef worked side by side very much in sync with very little communication.

Sonya was in pantry and though from Bulgaria, and self taught fluent in French, her very limited English was quite comforting and endearing. She explained everything to me as best as she could, and we’d giggle and make funny gestures as we tried to get to know each other. She eventually threw me an apron, probably tired of trying explaining everything to the American. I jumped right in at her direction and did my best to stay out of her way. She was a firecracker. She had a lot of sass and wit, and I didn’t need to speak French to figure this out. The other guys in the kitchen looked to her for a little comedic relief during the rush- she always delivered. 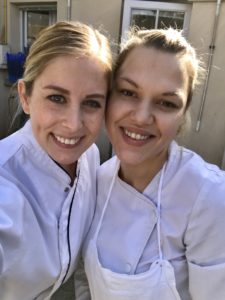 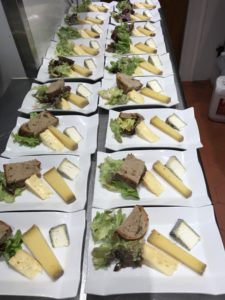 Lunch service seemed to end as quickly as it began and the cooks dispersed to have some coffee and a cigarette. Soon enough, it was time for family meal: a few whole roasted chickens and a mishmash of roasted veggies. The kitchen crew was small, and all very close. They all worked both shifts, beginning their day around 9am and finishing around 10pm. Two family meals are prepared each day, and from what I saw, Chef usually makes them, AKA it’s delicious every time. The card table was brought out once again and I sat with the crew as we fueled up. Chef sat alone in the dining room and Natalie went upstairs to eat while catching up on TV, and I sat where I felt most at home, soaking in the familiar kitchen banter. And with the bread and butter.

Service ended with Natalie and I closing the kitchen down on pastry. Natalie prepares all of the pastries for the restaurant, and is self taught. We looked through recipe books together and pointed out familiarities of techniques or ingredients, anything to find a connection with each other. When the final dessert came in, we quickly wrapped up and she said another French word I definitely understood, “Champagne?” 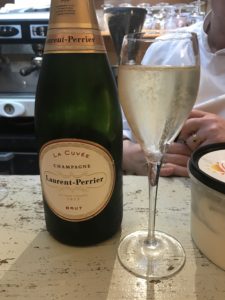 We sat us three and ended our night snacking on the leftover petit fours from the dining room, sipping champagne, and looking through old cookbooks. Chef Robert told me he’s been cooking since he was 16 and has never stopped. Their whole lives are this restaurant. Not because it has to be, because they want it to be. There is no other air in this entire building but of culinary passion. Even their house above the restaurant is designed around this lifestyle- clogs and chef coats by the door, a dining room table filled with paperwork and definitely not used for dining, and no stove to cook dinner up there even if they wanted to. They put their whole lives into this restaurant, and happily. This is called passion.

I fell asleep with Génépi the cat and woke up to a rooster and the scent of a busy service ahead. I quickly got dressed and headed down to a kitchen already hustling away. Chef Geoffrey the sous chef, was busy preparing all of the stocks and sauces for the day. He had spoken zero words to me the day before, so I was pleasantly surprised to get some conversation out of him this morning, not to mention he spoke pretty good English. He told me how to make sauce Albufera, which felt kind of like I was getting the key to the city. I spent a good amount of service chatting it up with my new friend and ended up grabbing a beer with him and Sonya at the bar across the street after service. This was my official “you’re in” sign. Mission accomplished. 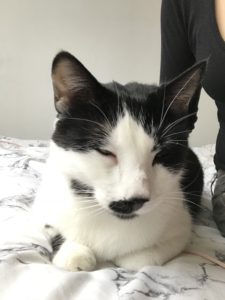 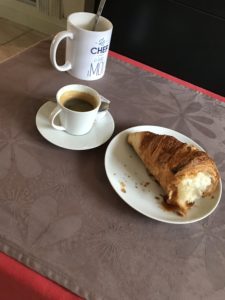 I took home a few awesome techniques that will forever be in my repertoire. Natalie hand wrote me her tuile recipe in French, the most thoughtful gift. I made two new friends, Sonya and Chef Geoffrey. I worked along side a very talented and one of the most passionate chefs I have ever met. I took home so much more than I gave to this restaurant, and I left with an experience that I’ll never forget. In a weekend of such unfamiliarity, I found so much comfort in those little things that connected us. Cooking is a universal language. No words are required, and passion for this career creates an unspoken bond. If you get it, you get it.