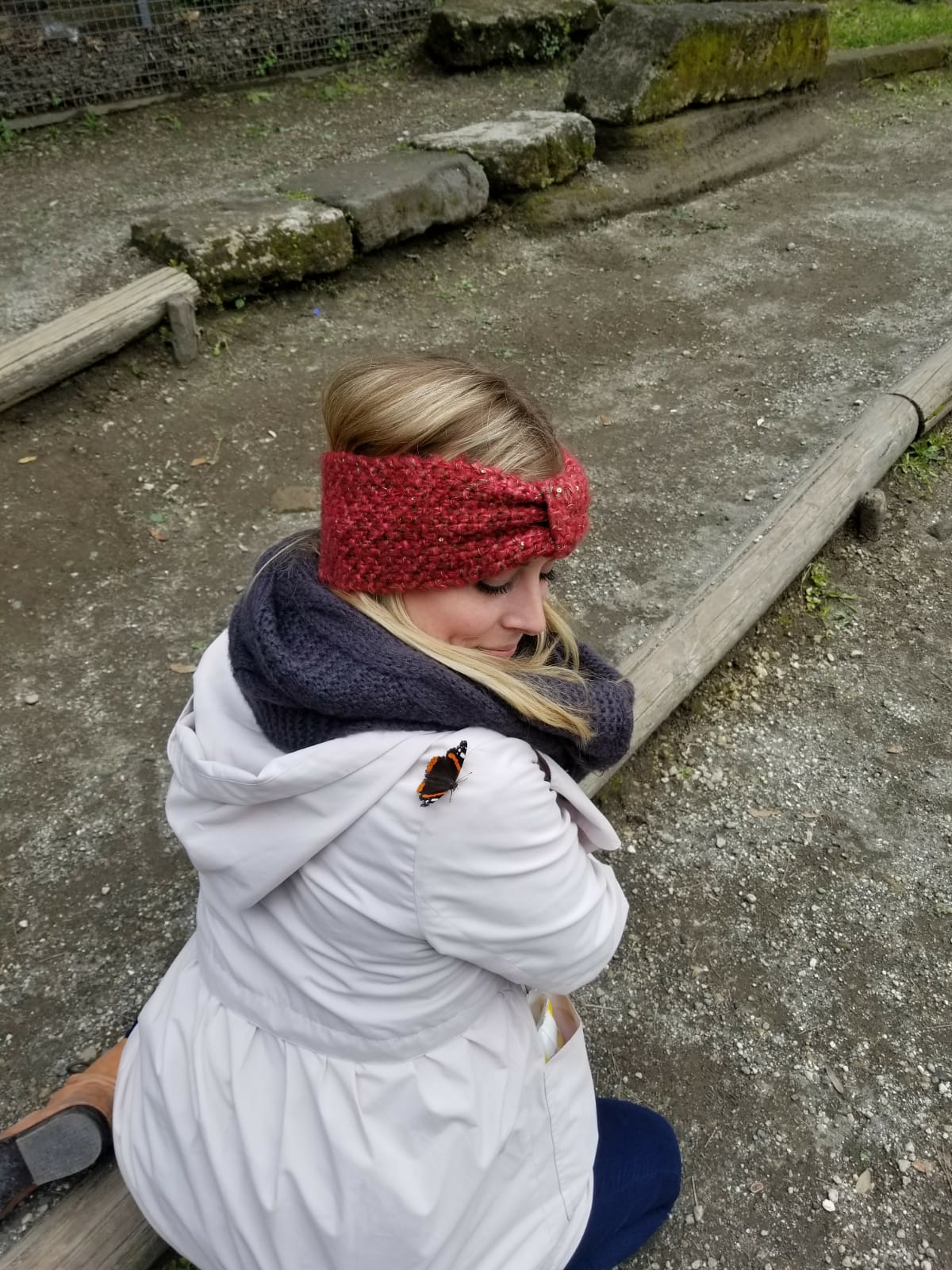 We planned our trip to Naples for two reasons: Pizza and Pompeii. If I’m being completely honest… it came down to the pizza.

Disclaimer: If you give zero f***s about pizza (said nobody ever) and just want to see really amazing pictures from Pompeii, you can scroll down to the bottom for the gallery.

There are pizza joints sprinkled all over the streets of Naples. How do you know which ones are the legit ones? I mean, its Naples… pizza was born here. Is there such thing as bad pizza here? Is there such thing as bad pizza in general? I don’t usually discriminate (I’ve never turned down a slice of Dominos). The short answer is no. There is no such thing as bad pizza in Italy. Every slice we ate from every city was slightly varied and delicious in its own way. However, in Naples, things got serious. It turns out that there are some strict guidelines to what qualifies as a “Traditional Neapolitan Pizza.”
First, anything beyond tomatoes, mozzarella, and basil is already disqualified. This is all that *most* Neapolitans believe should exist on a pizza. But it doesn’t stop here, if you want to get technical. The Associazione Verace Pizza Napoletana (VPN) has created specific requirements that a pizzeria must adhere to if they want to be certified as an authentic Neapolitan pizza:
1. The dough must be made from Italian 0 or 00 flour and fresh Neapolitan yeast.
2. No rolling pin is allowed in forming the dough.
3. All toppings must come from the Campania region- San Marzano tomatoes, mozzarella di Bufala, and the olive oil must be extra virgin.
4. Baking time cannot exceed 90 seconds.

These rules get much more specific, as detailed in an 11 page document that you can find on the VPN website, but I already write way too much in these blogs posts, so I’ll spare you. I accredit most of my extensive Neapolitan pizza knowledge to David Chang and his Ugly Delicious series on Netflix, and TBH the pizza episode was probably the catalyst to finalizing our decision to visit Naples. We needed to further investigate this whole pizza debate. We knew what symbol to look for when searching for a pizza spot on our first night, and any pizzeria who has been certified by the VPN will proudly display the symbol somewhere outside their restaurant. We ended up at Pizzeria Vesi, knowing nothing about it except that it was bearing the symbol. We arrived probably 5 minutes after the restaurant had opened, as they were still warming up their pizza oven. We ordered a marinara (no cheese, just roasted garlic and oregano on top), and a margharita (topped with buffalo mozzarella and basil), even though there was a substantial variety of pizzas to choose from. We took them to go, literally ran to our hotel, and ate them in bed with our PJs on. The verdict: this pizza was good. Very good. This was our first taste of Naples pizza, which we had high expectations for, and it delivered. The flavor of the tomato sauce and the fresh grassy EVOO was probably what stood out the most to us. This pie was damn tasty. However, we needed to fully investigate the pizza scene in Naples. 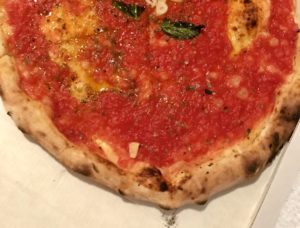 You know that movie Eat Pray Love? Julia Roberts eats at L’Antica Pizzeria Da Michele, a pizzeria in Naples that has been around since 1870, and arguably the most famous pizzeria in the world. The way Julia Robert’s character describes her pizza experience is almost enough to get on a plane and fly straight to Naples. However, if we’re getting technical here, it turns out that Da Michele is not one of the certified pizzerias in Naples. The two major distinctions: they use sunflower oil to top their pizzas rather than EVOO, and fior di latte (cow’s milk cheese) instead of buffalo mozzarella. The locals do not favor this restaurant, it seems that this pizzeria has become more of a tourist attraction than a place to find the best pizza in the world. But, that did not stop us from waiting our turn outside until a table opened up in the sacred pizzeria. We were lucky and came on a Monday afternoon, with only a short(ish) 30 minute wait. This place was slinging out pizzas left and right. It was nonstop. There were 2 pizzas on the menu: marinara, and margherita. We got the margherita and waited patiently for this glorious pie to arrive. When it arrived, we were initially extremely excited by the bubbly charred crust. The flavor of the crust was our favorite part of this pizza, it was salty, chewy, charred, and delicious. 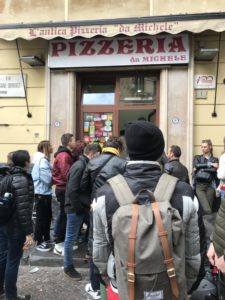 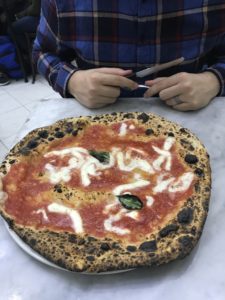 I never thought I’d have so many feelings and opinions about pizza, a food I literally eat cold for breakfast, but after my Italian adventures, I do. First of all, Neapolitan pizza is different than anything I’ve ever eaten in the states. Pizza in Italy in general is different than pizza I’m used to back home. First of all, you’re supposed to eat an entire one to yourself- something I almost conquered by the end of our time in Italia. Second, the simplicity and quality of the ingredients is what shines- it’s not about the the quantity of toppings, it’s about the quality. Lastly, and this is one I really had to learn to love, is that this pizza is not crispy. It’s more like… wet and soggy, in the best way possible, and the reason most Italians go at it with a fork and knife. It’s kind of like how the word moist a horrible way to describe something but it’s also the best way to define the perfect piece of cake. The texture of the crust is much more chewy and almost doughy (again, in the best way possible) than crispy and cracky. Make sense?

Here’s the dilemma: I do not have a definitive answer for which pizza won this battle. Pizzeria Vesi had better flavor, and it was the quality of ingredients I could taste in every bite that made me love this pie. However, the pizza at Da Michele had the winning crust. It was so charred and bubbly, the flavor of the dough was outstanding, and the buzzing vibe of this crazy busy pizzeria made for the entire experience. If I was forced to choose between the two, I would choose Vesi- based on the fact that I thoroughly enjoyed this pizza from start to finish on my bed in my hotel room, even after we ran through the streets of Naples with it in an attempt to eat it while it was still hot. And because we didn’t have to wait outside for 30 minutes to enjoy it. Ultimately, does this come down to the fact that Vesi is a traditional VPN certified pizza? No, I don’t think so. This association was created in 1984, and great pizza has been around in Naples for decades before these guidelines were created. I think it comes down to care and quality of ingredients. Which restaurant do you think takes more care in crafting each pizza- one who makes a few hundred pies a day? Or one who is slinging close to 1000 pizzas daily? I would happily eat either one of them again, although if I ever find myself in Naples again in my life, I have a lot more pizza research to do. I wish I had the chance to eat about 8 more pizzas and could judge based on all of them, but alas our 24 hours in Naples, with a trip to Pompeii in between, only allowed us for two pizza moments. Side note- we had a very fantastic seafood dinner at Osteria da Antoino, this was for second dinner after an afternoon snack of pizza. Naples is also known for incredible seafood, so we obviously had to investigate that as well. 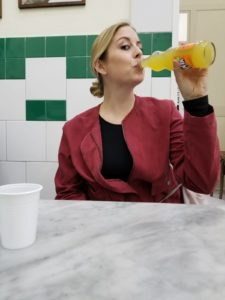 Finally, here are some incredible pictures from our day in Pompeii, not to be too outshined by the extensive pizza debate. This was a bucket list type of day trip with fascinating history and depth and I am so glad we were able to witness this incredibly preserved ancient city. The highlight of my day was the beautiful glimpse of life in form of a butterfly that landed on my shoulder as we ended our walk around the ruins. It was a welcomed reminder of the life and perplexity that still lives within a city that was so devastatingly destroyed 1000s of years ago. It was a delicate feeling of serendipity that told me that I was supposed to be at that exact place in that exact moment. I can’t describe it more than that, but I’ll forever be thankful for these small signs that life throws my way when I least expect it.